Under the names Terry White, Robert White, and Robb T. White, Robert White has published dozens of crime, noir, and hardboiled short stories, and three hardboiled private-eye novels.  A lifelong reader of crime fiction, he published his first story in Gary Lovisi's Hardboiled magazine. Since then, he has published several dozen crime stories, and a collection of mainstream stories in 2013. An ebook crime novel, "Special Collections," won the New Rivers Electronic Book Competition in 2014.

White was born, raised, and continues to live in Ashtabula, Ohio. 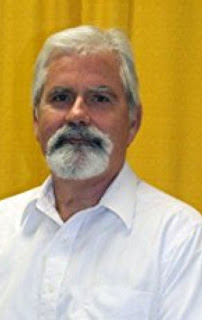 If you got a catapult for your birthday, what's the first object you would launch with it?

This question really appeals to my darker nature.  I think of plague-riddled corpses launched over medieval battlements in a siege. I do have two or three personal candidates I’d love to see strapped into such a device, but I’ll let my better angel dictate a different answer. A pumpkin.

When did you first discover you were a writer?

I know it smacks of false humility to say I don’t consider myself a writer, but the truth is I’m reluctant to attach that honorific to my name. I don’t deserve it.  When I think of the writers I have read and admired deeply over many years, I cannot put myself in their company. For a while, I had an agent in New York City who valued my writing—or at least a couple of the characters in a thriller manuscript I’d sent her, and she embarrassed me by calling me a writer. I’m happy to be considered a producer of “entertainments,” and if my novels are liked, that’s all very nice. But real writers are another breed altogether. I’m not obsessive about my writing and that should disqualify me.

If you crawled into a chrysalis today and began to metamorphose, who or what would you be when the chrysalis opened?

You might guess I’d say “writer” after that prior response, but the truth is I’d be the quarterback that would finally save the Cleveland Browns.

What invention do you most appreciate?

The remote. The inventor should be given a Nobel Prize.

If you were a superhero, what would be your weakness? Your personal kryptonite? You can tell us what your powers would be too. :-)

I grew up on Superman comics and sat glued to the tube when George Reeves played him. I would possess all his powers except X-ray vision—who needs that? But boring through mountains with my fist, grabbing twenty-foot crocodiles on the Zambia River just when they go to snatch a zebra, that’s my idea of a great time. Sorry to say, I’d allow humanity to continue its backstroke in the cesspool, which is all we seem able to do as a species. I wouldn’t hurt those crocs, by the way. I’d swing them by the tails and skip them like stones gently across the surface.  I would fly all over the world, mostly avoiding people and cities. I’d see every place in 501 Must-Visit Destinations. My kryptonite would be my self-confidence: when would my magical powers fail? What if they failed at the moment I grabbed one of those killer crocs by the tail or just as I was about to chest-bump a hippo? Besides, I’m afraid of plane travel. I could never feel secure flying at 30,000.  Self-doubt’s a weakness Superman never had.

Let's talk about your new book!

When did you first start working on Dangerous Women?

It never occurred to me at first to write stories specifically for a collection like this from a woman’s point of view. Most of my characters are male since I began writing in 2011.  But if you’re thinking of crimes as plotlines for your characters, how do you not have women involved, and not for mere “relationship” purposes?  I grew up with five sisters, so I have no illusions about women. Take away the biological differences, maybe a small subset of genetic differences—for example, spatial perception which favors males or early communications skills which favors females—and we’re the same in our beings. The long and short is two years ago I realized I had enough stories for a collection and so I decided to shop them and was fortunate to find Anita York of Class Act Books.

What sort of books and other media have influenced your writing and storytelling?

At two different times in my life I was influenced by specific kinds of novels—mainly, the novels of Dostoevsky.  The Possessed even more than Crime and Punishment or The Brothers Karamazov had a great influence on me as far as portraying evil goes.  Stavrogin and Svidrigailov are two of my all-time favorite amoral characters.  The other belongs to a certain summer when I came under the influence of the existentialists, especially Camus. The Stranger is a work that doesn’t age even though existentialism as a philosophy belongs to another time.  As for other media, I’m a devoted crimedog when it comes to shows like 48 Hours, Dateline, or the programs on Investigation ID. I like to observe the mannerisms and speech habits of real cops.

Do you have a favorite character in Dangerous Women?

Regina Frontanetta in the first story is a prizefighter and private eye, two occupations I admire and could personally never have succeeded in. First, her courage is self-evident; most people in life think they have a certain amount of it, but in fact few people do.  We’re mostly sheep when it comes to risking life and limb. Getting hit in the face takes a special kind of person and she’s very smart, which is a quality I also admire. A close second is Natalie Sparks in the final story “Huffer Girl,” but she’s young and facing her first real test of courage.

I hate to say it but some of the male characters in my stories who wind up getting their butts handed to them by women or their own stupid decisions are most like me.  I’ll pick one.  The clueless narrator in “Diana’s Perfect Patsy” will do.

Writing a book is a big accomplishment. What do you like most about this book? What drew you to write it?

I like the idea that my female characters can be as greedy, carnal, and interesting as males, and I hope I portrayed some of those characteristics throughout the stories. What drew me to write it is, in part, a desire to balance the opposites in my own nature. My “good” female character first appeared in some of my hardboiled stories alongside Thomas Haftmann, my series private eye.  Annie Cheng, an FBI agent from an earlier work, is a “good” character, as is Jade Hui, a protagonist from a forthcoming novel. I took the former’s name from a young woman in China who had impressed me when I was visiting Beijing in 1999, and I meant her to be good, intelligent, resilient. I wanted to balance the Annie/Jade type with some other types who were not so good and a few who were corrupt or downright evil.

Thank you so much for your time! 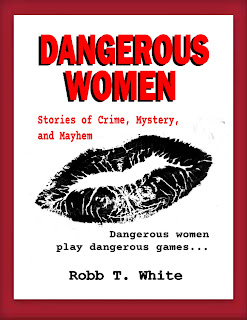 The female is definitely deadlier than the male.  Short stories about ladies who can hold their own.

Be careful what you wish for, Regina.
Her mother’s words. Sometimes she could hear her mother’s voice in the house.
The Vindicator piece on Bodycomb’s death was two paragraphs.
He was found floating in Lake Milton, a popular summer resort area for fishermen seventeen miles east of Austintown just off the Interstate 80 overpass. Shot by a small-caliber weapon in the back of the head. The important information was in the second paragraph: Bodycomb, it noted, was running a dog-fighting network among three states: Ohio, Pennsylvania, and West Virginia for a loose-knit West Virginia crime family connected to the Pittsburgh LaRizzo family.
Damn you, Leo.
She was blowing through caution lights, ignoring the honking of cars, as she beelined for the office on Market.
Like a script from a cheap thriller, he was there, wearing the same clothes and unshaven, big jowls dark with stubble, pong of body odor in the overheated single room.
“You promised me full disclosure, total honesty,” she said.
She threw the paper across his desk.
“Here it is in case you missed it.”
Be calm, Regina, she told herself. She wasn’t going to lose her temper and a new job in that order.
“I did and I meant it, Baby,” Leo said.
He glanced at the paper sideways and pushed it back to her. He’d obviously read it.
“You asked me—no, you demanded I call somebody. I did,” he said.
He disgusted her with those wagging jowls and big stomach. She noticed his belt was undone and a patch of curly belly hair exposed.
“I suppose you’ll tell me when the mood strikes.”
“I meant the second case—your next case,” Leo said. “Full disclosure, just like you want.”
Her indignation petered out at the prospect. “So tell me about it,” she said.
Bodycomb was moving in on Donnie Bracca’s territory with his dog-fighting, Leo said.
“He can kill all the dogs he wants in West Virginia,” Leo said. “But Donnie B. controls gambling around here.”
“Donnie Bracca was your real client all the time,” Baby said.
“It’s like this, kid. They don’t blow each other up in cars no more. Gentlemen’s agreements, all nice and polite. But rules have to be followed. Bodycomb went rogue.”
She bit back a retort: You mean, like your own father?
Leo went on, waxing large, a hopeless Mafioso lover, although a real mafia man, a made man, could see Leo couldn’t be trusted. But even the Aryan Brotherhood used outside associates to get things done. Leo could be useful if you couldn’t buy a cop or scare off an investigative reporter snooping in shady politics or business deals.
She didn’t feel bad about Bodycomb’s death. After all, she'd wanted to kill the guy herself.
“Damn it, Leo,” she said. “You should have told me this in the beginning.”
Baby moved in the direction Bodycomb’s vehicle had taken. After a couple hundred yards through meadow grass up to her knees, she stopped and listened. Moving on, she dodged stunted bushes that popped up out of nowhere to snag her clothing. The foliage grew less dense. She found the parallel ruts of the Road Runner’s tracks and kept moving, straining her eyes to see light ahead. If Bodycomb was hiding assets from his soon-to-be ex-wife, he was taking a lot of trouble over it.
After five minutes of faster walking in the grooves, she heard barking coming from the right. She saw the first glimmer of light in the distance. The terrain was sparse but small slopes refracted the light source so it appeared and disappeared with every rise of the ground. A single dog barking became two, then three and finally a pack. Beneath their howls, men’s voices.
When she got close enough to make out words, she lay flat on her belly and put the binoculars on a cluster of men beside a ramshackle barn surrounded by cages of dogs in the beds of trucks beside a squared string of light bulbs a dozen feet from the ground. It looked like a crude boxing ring for backyard brawlers.
Its purpose became clear in the next few minutes. It was a dog-fighting pit.

Publisher’s website (for paperback): http://www.classactbooks.com/component/virtuemart/cat-murder-mystery-suspense/dangerous-women-8472017-10-14-23-36-05-detail?Itemid=0
Amazon (for e-books and Kindle): https://www.amazon.com/dp/B076GCNMQ5/
Posted by Jeremy at 5:00 PM