Tony-Paul de Vissage is a Southerner of French Huguenot heritage, whose first movie memory is of being a six-year-old viewing the old Universal horror flick, Dracula’s Daughter, on television. He was subsequently scared sleepless—and that may explain a lifelong interest in vampires.

He is now paying back his very permissive parents by writing about vampires. Before the screaming starts, let's welcome Tony-Paul de Vissage to Nifty Newly. 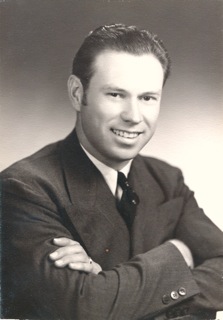 I’m currently struggling with a little paranormal tome entitled A Single Shade of Red. It’s a sequel to The Last Vampire Standing, which was published by Class Act books in 2012. It’s taking quite a while because the main character Vlad Chemare is being difficult.

I’ve written a total of 25 novels, including the aforementioned Single Shade.
Sixteen were paranormal/vampires novels; three were M/M romances; two were historical horror; and three were short story collections, now out of print.

Being a writer of supernatural stories, I’m inspired by nearly any novel, movie, TV episode, legend, myth, or anecdote in the same vein (no pun intended).☺

I have several books on names, and if I can’t find one to suit, I do a search on names from the particular country where my novel is set. I try not to use ones which are difficult to pronounce or which might be pronounced incorrectly by the reader, however.

I’m afraid I have a quirky imagination and it has a habit of twisting the endings of stories I’ve heard onto new and bizarre paths.

Well, we certainly don’t want the same thing being churned out day after day, do we?  Occasionally, we need something to wake us up and stir our imaginations, not simply SO-SO…same old, same old…cookie-cutter assembly-line narrations.

My series the Second Species. I thought I was being exceptionally original by creating a group of beings who weren’t really vampires but sufferers of the genetic disease X-P in which a person’s DNA can’t repair the damage done by ultraviolet light. I thought I was being very clever.  Time will tell if I was.

Thank you so much for joining us, Tony-Paul! We've attached a selection from Shadow Lord, as well as links to Tony-Paul Vissage's website and where you can purchase a copy of Shadow Lord. Have fun exploring, and be sure to bring a friend!


Blurb for Shadow Lord (Book 1 of the Second Species series): 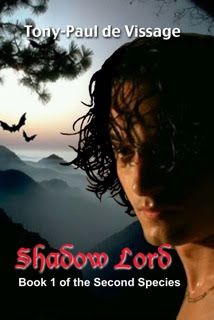 While Humans multiply into Earth’s dominant life-form, the Tree of Man sprouts another prolific branch—the aventurieri, winged, nocturnal hunters with a dietary need for blood. As legends evolve about them, Mankind's half-brothers live their twilight lives in the Carpathians’ shadowed heights, where they develop their own civilization, laws, and religion—and a prophecy of a savior paradoxically betraying his people.

When Janos Strigoi is murdered by Mircea Ravagiu, his son’s demand for revenge expels him into the outside world of 18th century Europe. Marek Strigoi’s existence, as well as that of his species, will be forever changed as he seeks his father’s killer.

When both the hunter and the hunted are vampires, not even Hell can stand in the way.

Though the sun had been down for many hours, Elsabeta Suvoi was still abed. Her lover liked her that way, wanting his woman where she was convenient whenever his lust seized him. Elsabeta was slavishly in love with Mircea Ravagiu. He was violent and insatiable, as cruel in bed as out of it, but she worshipped him. It had been so from the moment they met, after her father’s reluctant invitation to a banchet at his castel. Elsabeta had taken one look at the black-eyed warrior, saw the lustful gleam in his eyes, and left with him that night against her parents’ wishes. She’d sullied the Suvoi name to become his iubita...and she didn’t care.

He never spoke aloud that he loved her, though often he praised her body for the satisfaction it gave him. He said straightaway she should never expect marriage or offspring, but Elsabeta was a female of her time from a family of women considered mere chattels to their males, so she accepted his domination without argument. Running away with Mircea was her one independent act.

At first horrified by the bloody orgies and attacks upon the deomi, the humans living on the edges of his estate, she now ignored his rapaciousness and his brutal games, letting his prowess in bed distract her. When her lover and his soldati returned from their hunts, she locked herself in her bedchamber, its thick walls drowning out the screams from below. It was the cries of the children that cut most into her soul. At those times, she thanked the Oracle Ravagiu swore he’d never get her with child, for it came into her mind should it happen, it might be her own infant shrieking out its life in the castel banquet chamber.

To Elsabeta, Mircea Ravagiu was like one of the dreadful Ancient Ones who devoured its own offspring. She truly believed he wouldn’t hesitate to rip out his own child’s throat and drink its blood should the thought come to him. Yet, with that perversity Nature renders some, she loved the man and never thought to leave him.

She was jerked from her semi-slumber by the chamber door being kicked open, sat up to stare at the figure in the doorway...Mircea, upper body bare, wings hovering around him. They were still quivering, evidence he’d flown rapidly and had just landed. From where she sat, she could hear his harsh panting. He held something in his arms.

“Get dressed.” No words of greeting or love. Just an order.

“Why? What’s the matter?” A loud crashing came through the doorway, voices crying out. “What’s that noise?”

“My men are disposing of the vanjosi.” He answered as calmly as if merely announcing the moon had risen. “Strigoi’s freak’s on his way here and we have to go.”

“You should’ve expected this.” She dared remind him of what he’d done, though it jeopardized her own life. “Did you think you could slaughter his family and he wouldn’t retaliate?”

She’d been horrified when he returned from his brother’s castel announcing they’d been executed by the Prince’s Taietor, didn’t believe it when he said he planned to kill the Shadow Lord and his family. She hadn’t thought he’d succeed and waited to be told he was dead, resigned to living the rest of her days as an outcast for the choice she’d made. And then, Mircea returned, bloodily triumphant...and Janos Strigoi and his wife were dead and their children carried away to be tortured before their blood nourished their father’s enemy.

“I never thought that book-bound scholastic’d have balls enough to take a sword in his hands.” He stalked into the room. The sounds from below got louder, women screaming, men shouting, voices abruptly cut off to be replaced by others just as terrified. “Get up or you’ll join my servants.”

Sliding from the bed, she hastened to obey but as she reached for her chemise and overskirt, he said, “We’re flying. Make certain your wings are unhampered.”

The bundle he held began to move. It squirmed, kicking itself free of the swathing
blanket. A plump little leg, an arm...a baby, a little girl-child, tiny and out of place in Mircea’s deadly embrace.

“Dear one.” Elsabeta stopped with the garment in her hands. A sick dread twisted inside
her. “Wh-who’s that?”

“My daughter.” His answer was as short as if he’d bitten the word. “Now.”

Daughter? How can he have a child? Hadn’t he told her he wished no brats, that the only thing he wanted from them was their sweet, immortality-laden blood?

Shrugging her wings out of their concealing pouches, she peered at the infant. The child
whimpered, turning her head and holding out her hands. She was blond and blue-eyed, not quite a year old. This is Janos Strigoi’s child. Elsabeta’s heart felt as if it had been wrung dry.

“What are you going to do with her?” Even as she asked the question, she knew she had to prevent it. If she had to risk her own life and finally brave Mircea’s wrath, she couldn’t let him harm this child.

“It’ll be fitting, don’t you think?” His laugh was harsh. “Raising the Shadow Lord’s brat as
my own? Teaching her how to be a Ravagiu and some day, letting the survivors know?”

“No! Please…” A woman’s scream floated up to them, dying away in a bloody wail.

“Are you ready?” He thrust the child into her arms.

Elsabeta cuddled it against her naked breast, holding the little body tightly. I must do whatever it takes to protect this baby. If it kills me.

He held out his hand.

“Where are we going?” She placed her own in it. He led her toward the window.

“I’m fortunate my brother saw fit to have holdings in other countries and I’ve traveled to them.” One fist struck the shutters, sending them flying. He climbed upon the sill. “We’re going to Budapest. Hold tight to the brat. If you drop her, I’ll kill you.”

He flung himself through the window into the air. Naked as she was, Elsabeta was pulled along, clutching the child. Releasing her hand, Mircea circled and rose swiftly, his body completing a graceful curve as he aimed himself over the trees, Elsabeta trailing after him.

Below them, the killings continued for another hour.


Find out more about Tony-Paul at: