Michael D. Smith was raised in the Northeast, then the Chicago area, finally moving to Texas to attend Rice University, where he began seriously working as a writer and visual artist.  He's been writing science fiction since he was seven, extending a branch into literary fiction along the way. "Childhood writing energies seem to linger in my modern writing," he explains.  "I’m very much into humor as well as the exploration of psychological themes; somehow these disparate forces work together for me."

His day job is Technology Librarian for McKinney Public Library in McKinney, Texas.  His work includes assistance to the public with eBook and eAudiobook content and devices, and he's done extensive programming for adults, including book talks and author presentations. He'll be in charge of the library’s National Novel Writing Month activities in November, also known as NaNoWriMo. Please welcome to Nifty Newly the accomplished and deep-thinking Michael D. Smith! 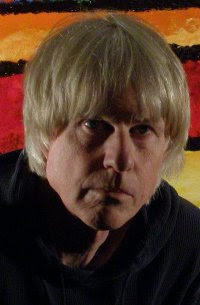 I have three novels in different stages of development:

Sortmind, which chronicles a start-up company’s invention of an app that provides all known information telepathically to any subscriber, and the urban riots which ensue in response.  Somehow the book also manages to include two sets of aliens with opposing ideas about dealing with this malfunctioning human race.  I'm up to Draft 8 on it, and I certainly hope it comes together soon.  In any case I wound up naming my website for this novel.

Akard Drearstone, about the rise and fall of a rock group in a commune north of Austin in the seventies.  I guess this qualifies for “historical fiction.”  I left the novel in the past so I don’t have to worry about things like smartphones with GPS, which can definitely play havoc with a murder/kidnapping plot.

I’ve written sixteen novels, of which six are published, with an additional one now under contract.  Then three novellas, one of which is published.  Most of these are science fiction of the space opera variety, but several are literary. CommWealth from Class Act Books is literary/dystopian/black humor.

I also just completed a fun project which I self-published on lulu.com.  I recently rediscovered my sixth grade science fiction story which, strange as it may seem, introduced several of the main characters of my later published science fiction series.  The urge then struck me to illustrate the story and make it into a paperback picture book.  That was quite a bizarre experience, another psychic bridge between childhood energies and the present, but the final result is more like a satisfying piece of visual art than a “publication.”

Things that make deep emotional and thematic sense, almost like a dream or déjà vu; or the eerie sense you sometimes get that you’re in fact living in a novel right now.  I’ve always been drawn to the concept of the psychological novel.  I'm not sure how well I’ve lived up to that genre, but I keep pushing on it.  And as I mentioned, somehow “humor” and “psychological novel” flow together for me; I don’t think I’ll be writing grim investigations like Crime and Punishment.  Then again, never say never.

Usually character names emerge on their own as I’m preparing notes or during actual fiction writing; it’s funny how sometimes a tossed-in name for a minor character in Book One can show up as a major figure to be developed in Book Five.  I respect whatever force throws the character names at me.  However, there have also been times when I’ve glanced up at my bookshelf and taken some author’s last name off the spine of a book.  I recently used an anagram producing website for a few character names (https://wordsmith.org/anagram/; beware—you  can waste a lot of time here).  I can also recall in the fifth grade looking through the phone book as I sought character names; I remember how professional I felt that evening, researching character names for a story.

As plot and character notes drift into my head over time, I jot them down on slips of paper and chunk them into an “ideas” folder.  Later on, sometimes years later, I harvest these ideas and though most prove too vague to be writable, I often feel fresh reverberations from a few and I write these up and add any new notions that arise.  Sometimes I take a batch of notes and arrange them across a large table and sort them, but while I’ve had some amazing syntheses and whole novels come out of this process, I’ve also had several notable failures where I finally realize, months later, that all my sorted notes are just “interesting concepts” and not a writable novel.  But even in that case, I chuck the whole sorted notes failure back into the ideas folder for recycling.  Who knows what might come up six years from now?  I also get ideas by working from existing characters and considering what they might do next.

Another method that can work quickly, and which I know many authors swear by, is the “What if?” scenario.  As in CommWealth, what if there were absolutely no private property?  The “What if?” for Akard Drearstone was: “What if I had gone straight from Rice University to a rock commune north of Austin?”  Often entire plots and subplots emerge from the simple “What if?”  Of course the “What if?” needs to be personally important to you, and if you bring your full energies to it, I think it will be important to your readers as well.

Dreams are another source of ideas and are often the core of my novels, though I’ve learned I can’t force dreams into novels.  If they fit in and work, great.  If not, try something else.  CommWealth in fact sprang almost fully formed out of a dream—which  also brought up the “What if? question.  I posted this dream on my blog at http://blog.sortmind.com/wordpress/index.php/2016/11/commwealth-the-origin-dream.

I think you should tell your own story, work your own themes, and not worry about how “original” your book may be considered by others.  It can be argued that nothing is truly original, yet it’s also true that we see many new adaptations, that each person brings a unique perspective.  Startling new ideas or plots may come and they may not.  Trying to conjure up "originality" as a means of standing out, of inflating your ego against other writers, or of marketing your book is futile; it comes across as cheap and flashy.


What would you consider a good example of originality in your fiction?

The outrageous dream logic of CommWealth’s propertyless society, in which there is no legal claim to any kind of private property, and any object from your house to the clothes you’re wearing can be demanded by anyone, to be enjoyed for thirty days before anyone else can request it.  The fact that this plot came from a dream was a factor in whatever amount of “originality” is in the novel.  Also, within the novel, a drunken character is inveigled into revealing the plot of his secret play, “Hiding the Hitler,” in which an app is invented for hunting down Hitler’s next reincarnation.  I don’t think I’ve ever heard of anyone proposing to hunt Hitler down in his next lifetime.

Thanks for visiting Michael, and for all the thought and effort you put into your work. I hope we get to work together again sometime! To experience more of Michael's fiction, read through the blurb and excerpt below from his upcoming novel, CommWealth. Links to his website, blog, and websites where you can purchase CommWealth are all included after the excerpt.

The CommWealth system has created a society in which there is no legal claim to any kind of private property. Any object from your house to the clothes you’re wearing can be demanded by anyone, to be enjoyed for thirty days before someone else can request it. As actors in the Forensic Squad theatrical troupe attempt to adapt to this chaos, their breaking of the Four Rules sustaining the system, as several members navigate betrayals, double agents, and murder to find themselves leading a suicidal revolution. 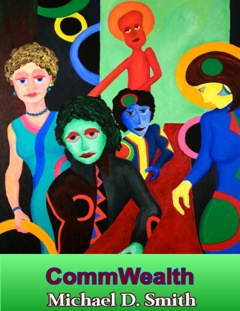 Excerpt (with minor edits for language):

Rule One - You are free to enjoy the chosen object for thirty days. During this period no other person may request it.

Rule Two - The requestor is untouchable for thirty days by the person asked. Attempts at retaliation, such as demanding unusually large quantities from the original requestor after the thirty-day period, carry stiff penalties.

Rule Three - Once you ask somebody for something, you can never ask him or her for anything else again.

Rule Four - You can never ask for the same thing back from the person who got it from you, not even after his or her thirty days of enjoyment.


Allan shivered at the reflection of his black overcoat and his striding legs on the wet sidewalk. Up ahead someone with a DreamPiston Electronics bag opened a shiny red Porsche glistening with thousands of water beads.

“C’mon, don’t give me any trouble. Gimme the key.”

“Look, it’s raining. And I just got these MP3 players and the new Fappy tablet—”

“Not my problem. Fork the damn key over.”

“Look, my umbrella’s in the car—can I just get my umbrella so my stuff—”

“Forget it. The umbrella’s part of the car as far as I’m concerned. Anything in the car. Besides, I just lost my umbrella a couple blocks back. I’m soaked.”

“Don’t hand me that. The sticker on the plate says you got it a month and a half ago. You’re overdue, buddy. Now hand me the key.”

“Got trouble there?” A bright blue City of Linstar police car idled in the rain. “Got a Hoarder there?” a huge officer grinned.

“Yeah, right—you just unlocked the damn car with it,” Allan said, turning to the policeman. “He is giving me a lot of crap about it.”

“C’mon, sir, you know better than that.” The officer’s name tag read BARCLAY.

“Dammit!” the twerp snarled. He separated the Porsche key off his key ring, thrust it at Allan, then spun around and fastened on a man coming down the sidewalk. “Give me that umbrella! Right now!”

“---dammit...” the man grunted, surrendering his umbrella to the twerp, who grabbed it and hoisted it above his DreamPiston bag.

“We really got the Christmas spirit here, don’t we?” Barclay said.

“Really,” Allan said. “Some people...” He examined the Porsche key in the rain. “Thanks for your help, officer.”

“Oh, I’m sure it wasn’t really necessary. People are basically good, you know. Give ’em time to adjust and all, that’s what I say.”

The twerp leapt into traffic with his new umbrella and his bag, waving his free arm. A little green car skidded to a halt. The twerp ran to the window and pounded on it. “Give me this car! Right now! Damn you!”

Barclay was out of his patrol car in a second, hand on his holster. “Sir, that’s not the right way to go about it. We need to be respectful. That’s the CommWealth way.”


Find out more about Michael D. Smith at: