Ken is a fellow Class Act Books author, with a focus on science fiction titles. If that weren't enough to take up all his time, he's also a web designer, an app and game developer, and he has a brown belt in kung fu. Right on! Please welcome to Nifty Newly, the one and only Kenneth Gordon. 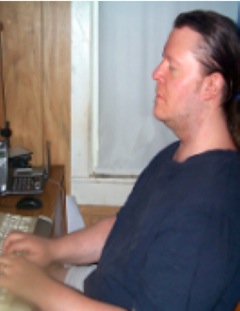 What's the title of the book you're currently working on?
In My Blood is about to come out in May.

How many books have you written? Published/unpublished? What genre?
5 books so far. One is coming out in Aug. My 6th book, I'm still working on. All are Science Fiction.

What inspires you, as a writer?
It could be almost anything. This book coming out was inspired by my cat scratching me in a particular pattern.

How do you come up with names?
For me names are quite specific. I will spend time looking at baby name sites, sometimes name generators are helpful. I have a meaning in mind, so it can be difficult to find a name that matches that meaning. Most lead characters, however, have common names so the reader can more easily identify with them.

How do you come up with ideas?
All I need is one flash of inspiration and I'm off and running.

Why is originality important in fiction? Or is it important?
I'd say it is very important. It's up to us as writers, especially in the sci-fi realm, to take what is known and expand on it, to look towards the future. Originality will keep people coming back to your books. If each one follows the same formula, what is in it for the reader? If you know the detective will solve the case in five minutes every time, what is the point of reading it?

What would you consider a good example of originality in your fiction?
From my soon-to-be-released In My Blood, the ship that travels to the alien planet performs a series of quantum jumps. During them, the ship appears transparent and you can see the stars whizzing by. I do not think that has been seen before.

Thank you so much for sharing with us today, Ken! If you would like to learn more about Kenneth Gordon and his newest book, please check out the bio, blurb, and excerpt below. I've also included links to his website and social media pages.

Kenneth Gordon grew up in Milford, NH and still lives in that state. When he isn’t writing scifi-infused horror novels, he plays PC games, electric and acoustic guitars, and drums. He also holds a brown belt in Kung Fu. 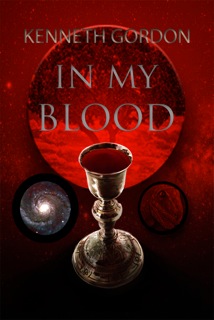 There is a plague on an alien world and emissaries have been sent to all inhabited planets to find the Chosen One. It is he that will cure that plague that now afflicts so many.
Thomas Anderson, from New Hampshire, is just about to start his third year of pre-med at Emory University when he meets a strange little man.
Tom is whisked away to the whirlpool galaxy as he starts researching the plague and begins working towards a cure. Little does he know that the cure will cost him everything! He must decide if he is willing to give up his life for a people he doesn’t know on a world that is not his own.

Excerpt:
“This is what we know currently. The disease originated on the second planetary orbit. The Crown Prince and two companions went to the jungle world on an exploratory mission. The Prophet had already told him before he left not to eat from the Faluth tree. After a couple days of exploring, they came upon one of those trees. He was warned again not to eat it by one of his companions, but I suspect his pride overcame his good judgment. I postulate that he may have said ‘I am the Crown Prince, I can do anything I want.’ Thus mocking the words of the Prophet. Six months later, he was dead."
“I don’t understand. How could a fruit kill him?”
“Not only him, but his companions and the royal physician who treated him. Now it has spread to the rest of the province. There are even reports it is in the other provinces as well. If you do not act, our entire species is doomed, along with the other people groups on our world.” The alien lowered his head, closed his eyes and made some sort of humming noise.
“That is our ‘Jick-now,’ funerary song,” Kai explained.
“Again, how can a fruit kill?”
El stopped humming and continued, “We don’t know. He presented with gah-fla symptoms for a couple of days, but seemed to recover. Six months hence, he was at a gathering, took a drink, and dropped to the ground, dead. It was only after we performed a post mortem that we found his heart was completely black.”
“What is the normal color?”
“Red to pink.”
“So, much like us; humans, I mean.”
“Indeed.”
“I really don’t know what exactly I can do. I’m only in my third year of pre med with one infectious disease class under my belt.”
“My son tells me that you are the Chosen One, therefore you will cure this plague. I must confess to you, human, that I have my doubts about you.” Thom stood up and took off his shirt. El-min’s eyes grew wide and his mouth opened wider. “You are indeed the Chosen One. Forgive my doubts.” El-min bowed his head low.
“Nothing to forgive.” Thom said as he put on his shirt, “Truth be told, I’m not sure I can live up to your ideal, but I’ll try my best. Can I get—”
El-min raised his hand. “I just received a message from the ship that we are about to make our first jump. Please sit down and prepare yourselves.”
The three sat down in the chairs.
“Don’t we need seatbelts or something?” Anderson asked.
“Remember the car?” asked Kai-min.
“Yeah.”
“Passive restraints?” the younger alien said.
“Oh, yeah. Ok, same deal.” Thom said as his body stiffened, not knowing what to expect.
“Jump in 3…2…1…JUMP!”
Thom closed his eyes tight and gripped the chair with a white knuckled grip. There was a strange rushing sound. He dared not look, but his curiosity got the better of him and he peeked open one eye. It was as if space itself were passing through the ship and him. He could see stars, constellations, planets; like the ship was invisible, and he was traveling alone in the dark, cold, vastness. Particles passed by him; he felt he could reach out and touch the very fabric of spacetime itself. In an instant it all compressed and whirled past him at incomprehensible speed, yet the ride was as non eventful as sitting on his own couch. Then the wall of the ship came back into view, and the trip continued as if nothing had even happened.


In My Blood will be released in May by Class Act Books. It will be available from the publisher’s website and Amazon.com.