Some authors have a gift for natural-sounding dialogue that makes the rest of us jealous. Ruth Crook is one of those authors. I met her briefly at Southern Virginia University before I graduated, and as I read through her sample for this interview I couldn't help but wish I'd gotten to learn more from her before I left. She definitely has something to share with the world. That said, let me introduce you to my friend, Ruth Crook. 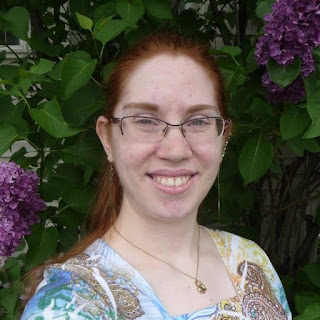 What's the title of the book you're working on? It doesn't have a name yet. Working vague idea is 'my dragon book;' because I only have one so far.

How many books have you written? Published/unpublished? What genre? I've got at least three completed manuscripts, two of which are co-written. All of them are fantasy, one also somewhat meta-fiction.

What inspires you, as a writer? Music, great stories of any medium, friends who enjoy brainstorming. Sometimes random life experiences that suddenly seem to fit characters that may or may not have been there before.

How do you come up with names? Depends. Sometimes I go research mode and go to sites like behindthename.com. Other times I just throw random letters together until something feels right or gives me an idea of a personality. Also looking at credits of movies is fun.

How do you come up with ideas? See my inspiration. Oh and research. I love doing research on something pertinent at the time, whether it be sharks or a historical event or new technologies. Everything has a part in a story; the question is which one is yours.

Why is originality important in fiction? Or is it important? Originality is making someone think about something in a way they haven't before. It is important because it will make the story mean something to the person who reads it. It is also not the only important thing, because almost no perspective has not been covered before. It is just how many people do you manage to help see things anew?

What would you consider a good example of originality in your fiction? Um... Well the main character in my dragon book has a horrible stutter that partially drives some of the anticipation and actual plot. I haven't seen a lot of that problem in fantasy.
Another might be... One of the manuscripts has a character who is really ambiguously neutral except for their own self interest, but does care about others, but also manipulates them to help protect them?
Or the fact that one of my villains is a rather horrible person to all except his daughter, who he still isn't great to and doesn't hide the fact that he's a murderer, but she still manages to have normal morals and they love each other in a great father/daughter way? Somehow?
I suppose if you generalize it all sounds done before. But it is the perspective I enjoy sharing that could perhaps be original.

Thank you so much for joining us today, Ruth! Please support Ruth by checking out the excerpt below, after which you'll find a link to some of her fan-fiction.

Excerpt from Ruth's 'Dragon Book,' Title TBD.
NOTE: The following excerpt is not from a finalized draft; all content is subject to change. 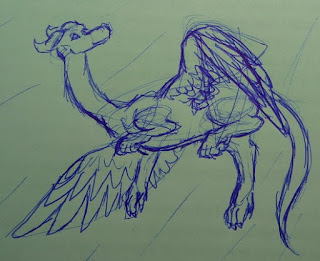 “Right, Graysen.” She glanced out the cave. “The sun is getting lower. Come back tomorrow and I will have something for you to do.”

Graysen blinked and chewed his lip. “…R-right. Of course.” He had forgotten to ask if she needed anything today. But he would probably spend the next ten minutes trying to get the sentence out.

As he left the clearing, he saw the remains of the bonfire again and heaved a sigh to himself. He’d meant to bring up the embers, the smoke, how she would attract attention. He should actually probably bring that up. He considered going back-

He jumped, fell over, and scrambled to get near a tree. Breath heaving, he looked and saw Pieter somewhat close. He relaxed a bit, trying to get his breathing easier again.
“P-Pieter! Pieter, wow, um. You… you scared me.”
“I scared you?” Pieter scoffed. “Yeah; and you are a clodded lucky idiot! That… was what I think it was? In the cave?”

Too much, too soon. Graysen felt faint.

Graysen breathed a bit, thankful he was already on the ground, closed his eyes, focused. Breathed again.
“Um… O-ookay. S-sorry. Ah... what?”

“I said, a dragon,” Pieter repeated. “And you were talking to it. So no fainting on me because that won’t work. I will wait.”

He sat down to prove his point, watching Graysen.

Graysen had been so tired and muddled before, but this, Pieter’s gaze, set him on edge again, though didn't clear any thoughts. Graysen looked everywhere else, trying to find an escape, trying to find an excuse not to talk about it, about her. The dragon. Lady Almyra. Was that even a proper way to address a dragon? She wasn’t a lady, was she? Or maybe she was- why was he worrying about that now?

He cleared his throat, put a hand through his hair, breathed again. Glanced nervously at Pieter.

“Heard. And saw, a little. I’ve not gotten too close, tried to stay downwind.”

Graysen nodded, thankful for that, still not focusing well. “Um… How did- W-why- Um. Y-you’re here. Why?”

“Answer me first, Graysen. That is a dragon? And not some… I don’t know, a… strange… bear, or something?”

He sighed, obviously not even believing himself.

Graysen shook his head. “Sh-she’s real. Definitely. I… I- there were flames. Once, maybe twice. And- and the fire was gr—” Oh. The embers. He swallowed. “… Did you… see it? Smoke?”

“Oh, you mean the bonfire outside the cave? Yeah, that certainly got my attention a day or so ago. I figured it might be something to do with the festival, since it was kind-of closer to town than we were— I was asked to look into it, though no one is real worried about it. Well, they aren’t right now. They will be when I tell them.”

His face was somber.

“Graysen!” Pieter glared at him, confused. “It’s a dragon! You can’t just- just hide it! Especially in a forest! Close to town!”

“She’s not- She- Aaaahh…” Graysen floundered. Pieter couldn’t go gather people right now, when Graysen still had no idea why she was there, what she wanted. “Pieter, please.”

“Graysen…” Pieter said. “I’ve never heard of a dragon in the forest. Or speaking. Now I've just seen both, but-”

“And she’s not done anything!” Graysen interjected. “Other than… than boil leaves! And- maybe eat a-a deer or something!”

“Graysen, she’s a dragon,” Pieter repeated, looking his friend in the eyes. “Even if she talks. Even if she hasn’t done anything so far. Even if- wait. What sort of things does she ask you to do?”
Graysen  shrugged. “I don’t know, just… things! I-I've gotten leaves for her, those pots I asked for, a-a bell…”

Pieter gave him a strange look, but Graysen just shook his head.

“You brought your dog?”

Pieter looked at him incredulously.

Graysen sobered a bit. “If- if I just came to you, and said I’d found a dragon, would you believe me?”

“And said- that I talked with her?”

He looked back in the cave’s direction.

“But…” he looked back at Graysen, confused. “How are you still alive?”

“Right. Sorry. I mean…” Pieter trailed off, rubbing his neck, then shook his head and sighed. “Okay. Fine. But… why haven’t you, you know, tried… doing something?”

“I mean, you know, acting on something, or-”

Graysen looked at him despairingly.

He grimaced. That wasn't the right word.

“I heard you the first fifty times!” Graysen snapped.

Graysen looked down, slightly red, from all of who knew what.

Graysen turned more red. “W-well, that part I added. Because… well… she sounded… noble? I mean, how do you address a dragon?”

Pieter grimaced. “Right. Well… does she seem, I don’t know, hungry? Or… flame-ish?”

“I don’t know. Does she seem about to attack anything?” Pieter asked, gesturing.

Graysen threw his hands up.

“I don’t know!  I-I don’t exactly have- experience in this kind of thing! Do you?”

“No… Right.” Pieter sighed again, ran a hand over his head. “What- ...We should go to Lord Straub- But Lord Blodgett is there too. Felsen! I doubt Lord Blodgett would do anything to help.”

“No, because even if he did, he'd then take credit and place blame and we’d end up with an even worse monster, over both lands.” Pieter retorted.

And then Graysen practically saw an idea hit his friend. “P-Pieter…?”

“Graysen… How… ‘reasonable’ is this dragon?”

Graysen sighed. “She… I don’t know. I- I can sort-of talk with her… but, not- not… um, I don’t know about reasonably.  Though, that is probably because… w-well.” He shrugged. “Me.”

“Then, do you think that someone else could-”

“Pieter no.” Graysen interrupted, eyes wide. “No g-going and talking to her! No!”

“Graysen, if she’s reasonable, then maybe-”

“And listen to yourself, Graysen!” Pieter retorted. “You’re defending a dragon with a proper name and everything! Trying to... keep her hidden! And not doing a great job at it, either!”

Graysen turned red and looked down, but didn’t let go of Pieter. “… Pieter, she- I don’t- I don’t know what she’ll do with other people. With- with people, really.”

Pieter shook Graysen’s hand off and stood up.

“But Pieter! She, um, she… seemed tired! A-and… grumpy! Yes, mad at the world. Not safe.”
Pieter ignored him.

“Pieter, I- I’m not- I don’t-” Graysen scrambled up and grabbed Pieter’s arm again.

Pieter looked at him, face set.

“Graysen. We are desperate. Lord Blodgett is a blot on the land with his own name, and now he’s trying to expand that to your land. Don’t you want to do something about it?”

“Usually we can’t, I know. It’s the lords that own the land and the merchants who run it. But maybe, just maybe, we can. Maybe this is The Great One sending us help!”

Graysen looked at him dubiously.

“Well? Do you have a better idea?”

“Well, maybe… um.” Maybe dragons weren’t what people always thought they were. Although he still had no evidence for that. He was still very afraid that she was just what everyone said dragons were. But she hadn’t been so far, not in the least. Except for the frightening bit. She definitely did that. Although it wasn’t as if she had to try very hard.

Graysen watched, his mouth taut as his friend strode towards the cave. Then, he tackled Pieter.

If you enjoyed this and would like to experience more of Ruth Crook's writing, please check out Simply a Backstory, a work of Princess Tutu fan-fiction, available here: https://www.fanfiction.net/s/10523176/1/Simply-A-Backstory
Posted by Jeremy at 2:57 PM