Destined to be one of the coolest names in fiction, Cassiopeia is also an old friend and former classmate from Southern Virginia University. She helped me beta-read my first book a couple years ago, and right now I'm beta-reading one of hers. I'm excited to share with you her take on originality, idea-generation, and inspiration, but I'm even more excited to see the book she shared with me in print. Let me introduce you to Cassiopeia L. Fletcher. 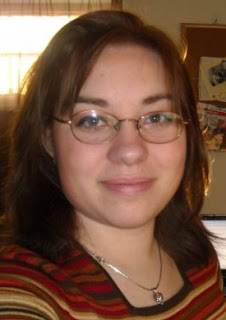 What's the title of the book you're working on? I have an attention span problem so I’m always working seriously on several books at a time. I’m currently focused on two specifically: The World Over and The Book of Ages.

How many books have you written? Published/unpublished? What genre? Three, none yet published. One was a superhero book, one a science-fiction thriller, and the third a chicklit romance.

What inspires you, as a writer? I never know until I’m inspired. I suppose it’s cliché to say ‘life itself,’ but that’s generally it.

How do you come up with names? It’s hard to say. Most of the names I have for characters started so long ago that I can’t remember where they came from. I do know that most of the time, especially for main characters, the name just sort of happens. In those cases, I often have ‘filler’ names before the ‘real’ name manifests through my writing while other times the name and character come before the story itself. On very rare occasions, I look for names in a babyname book or app that has the meaning I’m trying to convey. Of course, if I’m writing High Fantasy, I usually just make up a name, but I always try to assign that name a meaning in the language it originates from.

How do you come up with ideas? Ideas are a lot like names for me; they usually just appear. Sometimes I pull them from a dream, other times from a TV show or movie that had an abandoned plot-thread that I thought needed explored, and a lot of the times through conversations with family and friends that pull up ‘what if’s or ‘wouldn’t it be cool’s.

Why is originality important in fiction? Or is it important? I am in the school of thought that there is no such thing as an original story. All of the greatest tropes and narrative arcs have been done since the very beginning of human literature and so there is very little to be written—if anything—that is truly ‘original’. Even those few stories that have never been done before aren’t really original, they’re just too boring for anyone to want to read. That being said, originality in fiction is very important, not in spite of the lack of original stories, but because of it. Readers have an emotional connection with the things they read and that connection is what makes them want to keep reading. Having a story that everyone can connect with—boy meets girl, girl hates boy, boy and girl fall in love, break up, get back together and live happily ever after—makes it easier to create a narrative that people find interesting and characters that they want to root for. What makes each individual story unique is not the story itself; it’s the way it’s told.

What would you consider a good example of originality in your fiction? I like shaking up the common tropes just enough to surprise. For instance, if I have a character that is well loved by both the people in the story and the readers of the story, I’m probably going to kill them (assuming it’s the kind of story where that makes sense) or put them in some sort of peril that makes it very possible that they will die. Not because I like hurting my characters, but because it creates an emotional reaction in readers that resonates. Even when I’m not killing characters, I’m still trying to create a strong emotional context between my characters, their situations, and the readers, because as long as the reader is invested in what is happening, the situation is unique and original, no matter how cliché or routine the story may be.


Thanks again, Cassie! If you would like to learn more about Cassiopeia's work and keep up to date on her writing projects, you can check out her blog here:


Excerpt from the first chapter of Book of Ages:


Alexis came back from the dead with a friend. At least, that’s what he kept calling himself. He appeared as a soothing voice that echoed through her lethargic brain, wrapping her up in mental arms to comfort and protect her. At first his words were indecipherable, just a meaningless murmur whispered insistently, the way a parent would try to reassure an inconsolable child, repeating the same strain over and over and over.
It was not your fault. It was not your fault. It was not your fault.
It was weeks before Alexis was coherent enough to understand the words.
It would be years yet before she believed them. If she ever did.
Of course, Alexis knew that Emrys wasn’t real. He was a subconscious manifestation she had created in the wake of having her entire life deconstructed in one horrible, world crushing moment. A manifestation that Dr. Harris had promised would be reabsorbed in time. Though how much time was anyone’s guess. It had already been six years.
Maybe her new therapist would have a more solid hypothesis. Supposing she ever got around to finding one. Despite the constant companionship of her neurological guest—or maybe even because of it—Alexis didn’t appreciate the idea of someone poking around in her head. Not even a trained psychologist. Her mind and thoughts were her own.
Alexis shook her head and stepped back to admire her handiwork. The sky-blue paint on her new apartment’s wall was hardly visible behind the masterful collage of black framed photos that now covered it. She had originally planned to use the silver frames she brought from home, but the large picture window allowed copious amounts of light to bathe her picture-wall at nearly every hour of the day. The glass would reflect enough sunlight without adding metallic frames into the mix.
“Well?”
Emrys grunted, as he always did when he disapproved. Early in their relationship, Alexis would have fallen into a tirade against his apparent lack of enthusiasm for her family, but their time together had soothed her temper in most ways. If not all ways.
“What has your knickers in a twist?” she asked, taking a jab at Emrys’s inexplicable British accent. She pulled her mass of blonde curls away from her sweaty face and neck with a groan. Hair-ties were clearly a must in this awful place.
Must you be so vulgar? Emrys asked in his detached, almost echoing voice.
“That was hardly vulgar, you old prude,” she bit back, resisting the urge to smile at their usual banter. Ironically, despite being a vivid reminder of her failing mental health, Emrys and his ever-present complaints had become the only source of stability, and even normalcy, that Alexis had in her life. On a good day, she might even admit that he made her feel sane. Or at least not completely insane.
“Well?” she asked again.
You know what I think, Emrys returned, his disembodied voice decidedly bitter. It is what I have thought since you first concocted this…ludicrous idea.
“Doth my ears deceive me?” Alexis asked, though she knew full well that she couldn’t physically hear him. “The Neuron Cloud is questioning my sanity?” She pressed the back of her hand to her forehead and feigned a swoon. “Oh the humanity!”
She could almost feel Emrys bristle at her mocking and she imagined how he must look, sulking from her tone. Obviously, as an insubstantial (and psychological) being, Emrys couldn’t be seen. But there were moments, especially now with the sun streaming in through the large, black paned window, that Alexis would almost swear she could see him as he might have been.
It was a faint image, more of an outline really, of a tall, athletic man with dark skin and shaggy, light colored hair. He stared past her, almost glaring at her collage, his arms folded resentfully as he stood with his broad back to the window. As if sensing her eyes, Emrys looked away from the picture covered wall and caught her gaze with a frown. His eyes glowed gold in the sunlight reflected off her mass of glass-faced frames.


Alexis blinked and the image disappeared. All that greeted her was a merciless flood of red sun.
Posted by Jeremy at 1:54 PM