A Southerner of French Huguenot extraction, one of Tony-Paul de Vissage's first movie memories is of being six years old, viewing the old Universal horror flick, Dracula's Daughter on television, and being scared sleepless—and he is now paying back his too-permissive parents by writing about vampires.

This was further inspired when the author was kidnapped by a band of transplanted Romanian vampires who were sightseeing in the South.  Having never seen a human who wasn’t frightened of them, they offered to pay his way through college if he would become an author and write about vampires in a positive manner.  He agreed…and the rest is history.

Several of T-P’s novels have won awards and he hopes his current story, Forever, My Vampire, will be a winner with readers, also.


QUESTIONS FOR THE AUTHOR

What's the title of your new book?

T-P: My latest epic (said in all modesty, ha-ha) is Forever, My Vampire, a light-hearted story of how an Irish town handled their vampire situation…not once, but twice.

What was it about this story that excited you most?

T-P: Taking the vampire story and putting in a new locale. As well as making it into a gentle satire. It’s more whimsical, filled with Irish lilts and brash Gaelic characters…though it does have its shivery moments.  It also pokes fun at all the clichés with which the movies have filled the vampire tale…the villagers descending on the manor house, the vampire being fended off with garlic and stakes, the cornered vampire cursing his attackers…

It’s all there, as tongue…uh, fang…in cheek as you can get without being a cruel burlesque.

What inspires you, both as a person and as a writer?

T-P: Just about anything. A weird-sounding word. A silly situation. A dramatic blog. If it gives me the least little heartstring-tug it could be turned into a narrative of some kind.

How do you generate ideas? Where do you like to look?

T-P: See above.  :-)  I also read a great deal and, before this current crisis, went to a lot of movies. Often, I’d read or see some situation and think, “I could do that better,” or “I’d do that differently” and proceed to write it out and turn the idea into a novella or novel of my own.

And last of all, what does your perfect day of writing look like? How do you create the right kind of physical and mental space for creative work?

T-P: That’s not difficult nowadays. Since I’m in seclusion except for necessary trips outside, it’s either 1) read; 2) watch TV; 3) write; or 4) eat. Out of the four, I generally fall asleep if I read or watch TV, and eating is going to put on the pounds, so I prefer to write.

In 1821, the good men of Balleywalegh drove a monster from their midst…or so they thought.

Now, it's 1926 and a light again shines in the deserted manor house window. The vampire has returned…or so they think.

Karel Novotny has the same name as the fiend, but he can't be a vampire…can he?

The girls of Balleywalegh adore Karel, especially Seamus Flannery's daughter Brigid, but when the lasses come down with a mysterious ailment, and their fathers start sharpening their stakes, Seamus has to discover the truth fast, or Karel may not survive to become his son-in-law.

Will the real vampire please stand up? 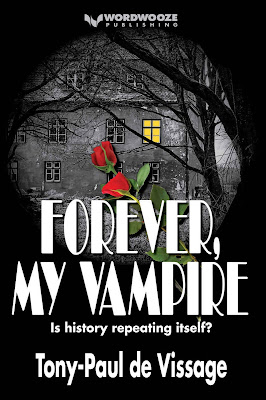 Novotny trod on the brake pedal and brought the Stutz to a rolling stop, setting the handbrake. It was a large, unwieldy affair, a long bar protruding from the floorboard
As he looked across at Brigid, sitting demurely in the passenger’s seat with her hands in her lap, he wished whoever designed the vehicle had thought to put that specific piece of equipment somewhere else.
“Do you have a suitor, Brigid?” It was something he should’ve asked earlier but decided to do so now, better later than not at all. “Some local boy who’s hanging around waiting for you to come back from the cinema with that cheeky foreigner? Someone waiting to take a swing at me, perhaps?”
“Isn’t that a bit impertinent?” She looked away as if he’d insulted her.
“Well…”
What was the right thing to say?
“I mean, have I asked you about your past loves and…” She looked stricken. “Oh, Karel, I’m sorry. I didn’t mean to mention that.”
“No, that’s no more than I deserve.” At last she wasn’t angry and he definitely wasn’t going to be. “After all, I did tell you my sin…or at least one of them, anyway.”
“You mean, there are more?” She was smiling now.
“More than you know and…I should shut up before you say you never want to see me again.” He inhaled quickly, going on in a rush, “Brigid, do you like me?”
“Of course, I do.” She turned a coy gaze on him, actually fluttering her lashes.
“Good, because I like you.” He found he was breathless.
“I’m glad of that.” She looked amused.
“No, I mean I like you… More than like, actually.” He’d always considered himself so masterful when it came to speaking, but suddenly, he couldn’t say what he wanted to. “I… I’d like to kiss you.”
He placed a hand on her neck, thumb gently stroking the softness of her throat.
“Do you know what I like?” Her eyes met his without blinking.
“What?” He was startled by that direct stare.
“A man who does somethin’ instead o’ just talkin’ about it.” She shut her eyes, pursing her lips…those luscious, pink lips…
He pulled her to him, leaned forward and kissed her. The damned brake lever was in the way and he had to clamber onto the seat and somehow lean over it to reach her. As he pressed his lips to Brigid’s, Karel silently cursed the Stutz’s designer, wishing he had put the bloody lever anywhere else. He lost his balance, falling forward so he was partially reclining on the seat as well as on Brigid, his free hand braced against the inside of the passenger door.
Well, the brake lever was keeping any action below his waist from happening, anyway, which, considering the way he felt about the girl, might be a good thing.
In the midst of the lustful feelings struggling to escape, he stifled a desire to laugh.
That’s a hell of a condom…all iron and steel and hydraulic tubing.