David is an author I look up to. He has this self-publishing thing down, and I think part of the key is that he has a compelling style and a tone that encourages reader trust. I'm sure it helps that he knows his way around the best publishing and promotional platforms. For a take on originality that rings of personal experience, please welcome David Gowey. 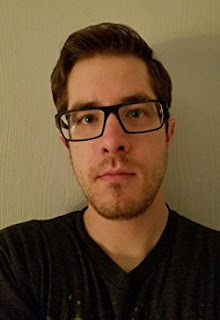 What's the title of the book you're working on? That's the big question, isn't it? I usually end up working on too many things at once and gradually finish one or another. Instead of listing all of those, I'll just say that the one I should be working on is The Work of Souls, which is the sequel to my first book.

How many books have you written? Published/unpublished? What genre? I've written and self-published two so far. Kaschar's Quarter is novel-length fantasy and First Instance is novella-length science fiction, though I might extend the latter at some point. The third, a fantasy novelette called Jire, is unpublished but will probably go up on Amazon in the next few weeks. [Jire is available now! Click on the image below.] 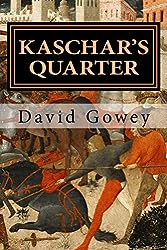 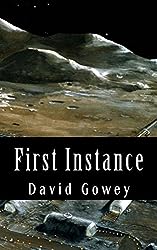 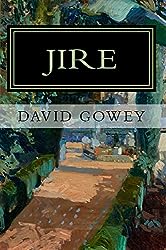 What inspires you, as a writer? I've always been telling some story or another, whether it's doing voiceovers with LEGO as a kid or doing something a bit more complex now as a graduate student. What I really want to get at is creating character experiences that feel authentically human, and putting them in a world that seems not so far removed from our own. It's about taking the weird things that go on inside my imagination and breaking them down into little chunks that characters can relate to in their own unique ways, and letting readers feel like they're peeking in on something real.

How do you come up with names? Usually, it's to fit the feel that I want each society in the story to have, or what Earth society I want it to bring to the reader's mind. This is done through either using a list (say, Spanish men's names) and changing them slightly to also give a feeling of newness with the familiarity. I also derive some from constructed languages, like how Jire's name means “red” and this has some implications about her characterization.

How do you come up with ideas? What I try to do in my stories is find some balance between relatable characters and unique situations. These situations usually come from reading history and trying to put myself in them, which then gets turned into a character. A recent example was reading about the Mt Tambora eruption in 1815, and trying to see what that aftermath would entail for a character who was really just a regular guy. There was no way for him to save the world, fix things by fighting against anthropomorphized forces of nature, or really change much at all except how he reacted to something that he only somewhat understood. I guess this could be a clue as to why not many of my stories have happy endings.

Why is originality important in fiction? Or is it important? What would you consider a good example of originality in your fiction? Originality is only as good as the execution, and the same can be said about being unoriginal. It would be easy to make just another fantasy story about talking dragons, dwarves, and halflings (not hobbits, though, since at least that word is copyrighted) but what's more difficult is for the author to make a good case that their story is different. Changing up the set dressing, as in pulling from a variety of sources beyond just the standard medieval/Renaissance Western Europe fantasy ideal is one way to do this, although it requires a lot of research to present non-Western (or really, unfamiliar) societies and culture in a way that isn't cheap or exploitative.

Thank you so much, David! I'm reading Jire right now, and I've been really enjoying the tight prose and thoughtful characterization. If you would like to learn more about David Gowey, check out his stories, or keep up to date on all his latest projects, you can check out his Amazon page here:

And here's his blog! Along with a number of writing excerpts for your reading pleasure:

The following excerpt is taken from “Waiting on the Rain”, a short story you can find in its entirety here.

It always rained on Lorakast. Something about the orbital distance or screwy atmospheric modeling, they’d said in the preliminary report on the way here, but there had to be more to it than that. Years in the business had taught Rell that much. She watched the rain pattering and pinging off the thick window that separated her from death by hypoxia and wondered where they’d gone wrong. Interplanetary Resources Incorporated only sent upper-level inspectors like herself when something had gone wrong, so it was her first assumption. But the colonial governor wasn’t cooperating, and that made things tricky.

She’d been in situations like this before. There was the riot a couple years ago, where the Thevashi ambassador had thrown such a fit over IRI’s installation on Gasin b that only the threat of RSA navy support had called off what promised to be a slugfest in orbit between prospector escorts and a surprisingly large contingent of alien scouts and their human buddies. Rell could deal with aliens and had on plenty of occasions; it was her fellow humans for whom she couldn’t find an ounce of patience.

Nothing had gotten out of hand. The translators had done their job with consoling the vaguely ursine attackers that this wasn’t just a smash-and-grab operation by IRI, that the terraforming operations were proceeding on schedule to bring about a human-tolerable atmosphere and not just a Thevashi-intolerable one. By the end of the little scuffle, the aliens packed up and headed home, appeased but not for long. What bothered Rell the most was that some people out there still thought she was some kind of monster.

And for what? For accelerating nitrogen production on a cyanide-and-sulfur wasteland that not even a Josikan would look at twice? For pushing out a bunch of claim-jumpers like the Thevashi whose only dog in the colonization fight was getting there first, and not preserving natural habitats as they claimed? And natural habitats for what? The only things alive on Gasin b were extremophilic bacteria that were already found across half the system anyway. Let the xenobiologists—and yes, Rell would still call them that, no matter how often she was told it was insensitive—take their samples and move on. It wasn’t like they were paving over Ryosh c, for heaven’s sake. Her boss might even balk at that one.
Posted by Jeremy at 11:37 PM