Another review incoming! The great people at Mythical Bat Reviews gave my book 4.5 out of 5 stars. They're a fun bunch, and well worth a look if you want fast-paced book reviews and chuckle-worthy banter about their favorite titles.
Posted by Jeremy at 7:39 AM No comments:

This has to be one of my favorite reviews so far. 5 stars! 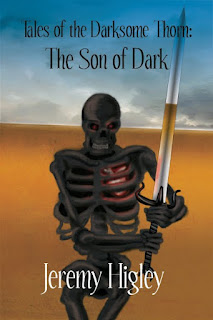 Author Linda Carroll-Brad interviewed me about The Son of Dark for her blog. It was great fun to answer her questions.
You can check it out here: http://blog.lindacarroll-bradd.com/interview/guest-author-interview-jeremy-higley/
Posted by Jeremy at 9:55 PM No comments:

I am now a highlighted author on HighlightedAuthor.com! A big thank you to Charlene A. Wilson and Julianne Tomczak for having me. :-)

http://highlightedauthor.com/2016/09/welcome-jeremy-higley/
Posted by Jeremy at 11:22 AM No comments:

My friend and fellow writer Lars Jensen just wrote an awesome review for The Son of Dark. I couldn't stop grinning as I read it. Please check it out and support his writing! He's got an epic storyline in the works, with a unique magic system, well-crafted characters, and not just one world, but an entire fleshed-out universe.

Welcome Jeremy!  My guest today has graciously agreed to answer some  introductory interview questions and to share an excerpt from his debut novel from Class Act Books, The Son of the Dark.
Jeremy, please introduce yourself.
If you are what you eat, I’m an apple. I’ve eaten an apple a day for as long as I can 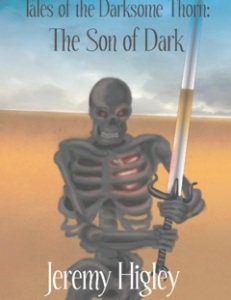 Sitting in the wagon next to Marga was awkward. The space was cramped, stuffy, and not only did Marga talk in her sleep, she talked a lot in her sleep. To distract himself, Skel decided to read from the Dun Ko’s book. He caught light from the opening in the back of the wagon and anchored the book against his leg so the wagon’s jostling movement wouldn’t make him lose his place.
“Wake up, stone-head,” he heard Smyra say from outside. He looked up through the small opening to see her sitting on the shoulders of a phagim. She was holding a long chain to trail across the ground while she traveled so she could keep channeling the earth’s power. Morkin had suggested the idea a couple of mornings ago.
“I’m listening.” Skel put a finger on the open page to mark his spot.
“Have you found anything in that evil book yet?”
“Anything useful, you mean?”
“Don’t be thick,” Smyra snarled.
“It’s mostly propaganda,” Skel explained. “Reassurances for the victim’s family, vague promises about a new age when the Dun Ko will—”
“It’s a yes or no question, dung-tongue,” Smyra said.
Skel took a deep breath and released it. “No.”
Without another word, Smyra steered her phagim to the left, out of Skel’s line of sight. He sighed and returned to his reading.
“Zhans klis bakarasa,” Marga muttered. “Bakarasa klin torm.”
Skel shook his head to clear it. Was Marga getting louder?
“Zhans klis. Zhans klis,” she muttered again.
Skel turned to face her. Perhaps she really was babbling, and these were all nonsense words instead of the dragon’s thoughts. Maybe the Wyvern was trying to intimidate them.
Skel turned away and tried to ignore her, skimming through a section on the Dun Ko’s eating habits. He stopped when he realized the way they ate was actually very different from most humans. He tried to focus.
“Bakarasa klin torm,” Marga raised her voice even louder.
Skel paused in his reading. Should he get Zar?
Something was definitely happening.
“Torm. Zhans klis. Bakarasa torm.”
Now she was shouting. Zar would be here any moment to check on her. The wagon stopped. Skel could hear Zar dismounting from his horse nearby.
“Zhans klis bakarasa klin torm,” she shrieked.
Skel couldn’t look away. Her face was contorting, her jaws forced apart by the power of the unearthly screams. What was the Wyvern doing to her?
Her eyes opened.
~~~~~~~~~~
Buy Links:
Publisher’s website: http://www.classactbooks.com/index.php/component/virtuemart/cat-young-adult/the-son-of-dark-tales-of-the-darksome-thorn-book-1-detail?Itemid=0
Amazon:  https://www.amazon.com/Son-Dark-Darksome-Thorn-Book-ebook/dp/B01IG983XC/ref=sr_1_1?ie=UTF8&qid=1469025983&sr=8-1&keywords=The+Son+of+Dark+by+Jeremy+Higley#navbar
Amazon UK: https://www.amazon.co.uk/Son-Dark-Darksome-Thorn-Book-ebook/dp/B01IG983XC/ref=sr_1_1?s=books&ie=UTF8&qid=1469026331&sr=1-1&keywords=The+SOn+of+Dark+by+Jeremy+Higley
Smashwords: https://www.smashwords.com/books/view/650660

Posted by Jeremy at 8:09 PM No comments:

When writing a “swords and sorcery” style fantasy like The Son of Dark, it is very easy to let the sorcery overpower the swords. I’ve noticed this trend in so many fantasies, and it isn’t necessarily a bad thing. For my book, though, I wanted a more even playing field. I wanted magic to be ever present, certainly, but when fight scenes came I didn’t want my non-magical characters to be deadweight. To make this work, I had to do two things. First I had to build my magic system with weaknesses that sword-users could take advantage of. Second, I had to write non-magical characters who could still hold their own in a world full of magic.

In many ways the magic system for The Son of Dark is very traditional. For wizards, magic is performed through a language of power, and the strength of the spell comes from the energy of the wizard’s soul. This has its obvious disadvantages when fighting. It takes time to explain to the elements around you that you want them to do something, and whether your spell is offensive or defensive, time is something a swordsman isn’t going to give you. The very versatility of language becomes a drawback. There are a hundred things a wizard might say in response to a sword thrust. While all the possibilities are crossing the wizard’s mind, his practiced opponent doesn’t need to think deeply in order to deliver a killing blow with a sword.

Further, the wizard can’t influence the swordsman directly with his magic.
The magic still has its bite, though. Wizards can call swords to them or turn them against their opponents, turn sand to glass and throw shards of it in all directions, or conjure flesh onto dead bones to create terrifying allies. Dragons can possess humans, or create a magical kind of fire that ignores flesh and cloth and burns the very blood inside your veins. Thrown into this magical world are characters like Zar, Morkin, and Largalarg.

Zar is easily the least magical major character in The Son of Dark. He’s a pirate turned merchant, and his most valuable asset in a fight against magic is his quick decision-making. He takes in a situation quickly and determines the best, most logical course. Before swords are drawn and spells are spoken, he has often already leveled the playing field by changing the environment to his advantage.

Morkin quickly becomes Zar’s most trusted ally, in spite of a vague background and even vaguer motives. The idea behind Morkin has always been that of a man who has turned a disability into a weapon. He and his entire people are cursed with silence, such that they can neither hear nor be heard. This silence extends to all human noises, including footsteps, clapping, and breathing. As a result, Morkin has perfected a ninja-like regimen of skills.
Largalarg, on the other hand, is a ten-foot-tall troll known as a Grag. Grags are known for making good non-magical mercenaries, and sure enough Largalarg serves as Zar’s personal bodyguard. His weapon of choice is a ball and chain, and his superior size and strength makes this a formidable choice indeed. Though impractical on a medieval battlefield, I figured that in a one-on-ten fight, wielded by a behemoth like Largalarg, a cannonball on a length of chain would be a sensible option..

Balancing the world so that characters like this could hold their own against magic-users was a personal goal of mine as a writer, as I hope I can demonstrate with the excerpt below.

“Someone’s coming,” Smyra whispered. She ignored
Skel’s frantic gesturing to try and get her to release him.
Skel struggled to dig the dirt fingers out, but they were
almost as hard as rock. Also, they seemed to be fitting to the
shape of his mouth. He even tried biting them, nearly
chipping a tooth in the process. He would have tried a spell,
but he couldn’t form the words he needed.
“It’s Cree. I mean Dawto,” Smyra said, staring through
the dune next to them. A quiet smile broke across her face,
chilling Skel to his bones.
“He must want a rematch,” she said with amusement.
A loud grunt sounded from the south, on the other side of
the dune. Skel imagined Smyra had conjured phagim
directly underneath the wizard to capture him before he
knew she’d spotted him. He thought of Dawto in the same
predicament he was in, and had to admit Smyra had
probably won the fight already.
The sand beneath their feet turned to reflective glass, so
suddenly and so perfectly at first it seemed as if the sky had
swallowed the earth. Smyra fell backwards as the ground
became slick. In the midst of his shock, Skel barely had time
to realize the phagim holding him had turned to glass as
well before he heard a small explosion. There was an
ominous tinkling as shattered glass began to rain on them
from the other side of the now glass dune.
“That’s it,” Skel heard Dawto yell. “I’ve ridden for two
weeks straight, lost my horse to an aja-aja, killed six more
aja-aja trying to save it, and gone without sleep for three
days trying to catch up to you before Azmat did.”
Dawto appeared over the crest of the hill, striding across
the smooth glass surface with remarkable ease. He’d grown
a short, unkempt beard since the last time they’d seen him.
Some of the hair was missing and his face sported some
nasty burns. They were still fresh, and they oozed pus. A
torn cloth bandage hung from his right shoulder, dark with
blood and grime. His eyes looked crazed as they peeked out
of his swollen face.
“You’re coming with me now,” Dawto demanded.

Posted by Jeremy at 8:23 PM No comments:

My Book Is Out!

My book is out! You can get it either on Amazon or ClassActBooks.com. Use these links to go right to it!

For the e-book on Amazon.

For e-book or print at Class Act Books.
Posted by Jeremy at 3:56 PM No comments:

Welcome to the World of Darksome Thorn!

Tales of the Darksome Thorn is an up and coming fantasy series by author Jeremy Higley. The first book in the series, The Son of Dark, is written and nearly ready for release! When it's available, I'll be including links to the websites where you can buy it either as an e-book or a print on demand (POD).

The publisher, Class Act Books, has a great variety of books for sale, ranging from fantasy, to romance, to young adult fiction. Please check out their website here.

I've started a wiki with information about the world of Darksome Thorn. There you'll find details about the setting and characters you might not find in the first book. You can find all that here. A fair warning: the wiki is a work in progress.

What will the book look like? This cover art was made by Simon Nightingale, an artist for Class Act Books. You can see more of his artwork at his website. 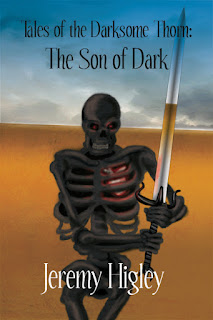 Posted by Jeremy at 4:02 PM No comments: